The threads of social justice and nonviolence are woven throughout our ministries.  In addition the Office of Social Concerns provides on-going education and advocacy opportunities for key Social Justice issues.

We are committed to ending the death penalty as well as human trafficking.  We work for immigration reform. We strive for equal housing and clean water for all.  We invite you to learn more about these and other important issues and to join us in taking action.

Sisters of Saint Anne seek to be:

Women of discernment, who hear the voice of God in moments of prayer and in the people they encounter…

Women who are contemplative in both prayer and action.

As Gospel women, we walk together as we follow Jesus Christ in our world, shaped by the above stated spirituality.  From this stand we add our voice to the many others in our nation crying out change in our policies, ideologies and actions that can allow for the continued environment of racism.  Our hearts are hurting as we mourn with the family and friends of George Floyd, the latest victim of the evil of racism.  We are a community that hopes and prays for the power of transformation, of our ability as a people, society and nation to move forward from our sins of injustice and human degradation to a people, society and nation that not only speaks the most profound truth that all of us are created in God’s image and entitled to dignity and respect but lives and acts from this truth.

Systemic racism feeds the injustices of poverty, poor education, sub-standard housing, inequitable employment and healthcare, police brutality, and unsafe streets.  We pray for all those who have lost a loved one to law enforcement violence, who live in fear, and whose dignity is threatened.  This suffering must be transformed now by ‘we the people,’ through our daily interactions of respect, education to break down the walls of fear and immediate changes to policies and law.  Real peace is never founded through militant means but through walking arm in arm in respect for each other to the table of honest dialogue.

We, as women of faith, stand in solidarity with those dedicated to justice, peace and right relationships in condemning violence and discrimination. We echo the confession of the Leadership Conference of Women Religious (LCWR) in the United States and acknowledge our own complicity in systemic racism. We stand with LCWR in asking forgiveness of our sisters and brothers of color.

Challenged to be prophetic witnesses tot he Gospel of Jesus Christ and committed to the vision of our Congregation which call us to strive to transform”…all that threatens life in order to create a more just and caring world,” we, Sisters of St. Anne, St. Marie  Province, United States, Canada and Chile, denounce the trafficking of human persons and stand with all those who oppose human trafficking.  (February 2008)

For ways to get involved go to http://polarisproject.org/

Compelled by the Gospel message and challenged by our foundress Marie Esther Blondin, whose vision mandates us to bring all to the fullness of life, we, the Sisters of Saint Anne of the United States oppose the death penalty.

On March 12, 1989, we assembled as a community to finalize a corporate stance on this issue in the context of prayer and dialogue, it became evident to us that the death penalty violates the teaching and spirit of Jesus Christ.

We recognize capital punishment as inhumane, irreversible, and inequitable.  It is a violent and superficial solution to complex social problems.  In its place we affirm restitution, reconciliation, nonviolence, aid to victims’ families and improvement of social conditions.

For ways to get involved go http://www.ncadp.org/action 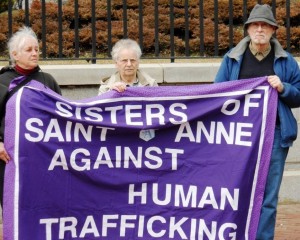 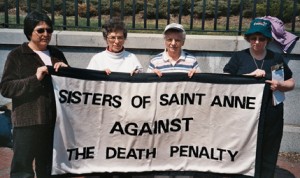