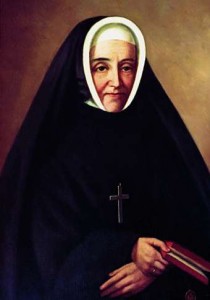 Esther Blondin was born on April 18, 1809 to a Catholic farm family in a rural community in Quebec, Canada.  Her mother taught her to worship at the Eucharist and recognize Divine Providence.  Her father taught her to have a strong faith and to be patient in times of suffering.

As a young woman, Esther worked as a domestic in her village to help her family.  Drawn to vowed religious life, she joined the Congregation of the Sisters of Notre Dame.  Illiterate, she learned to read and to write at age 22 as she went about the work of the Sisters. Ill health forced her to give up her dream of becoming a Sister of the Congregation of Notre Dame.  After a time of rest, she was Esther became a teacher and then the principal of the school. Later she would train young teachers who taught in small country schools.

Healthy and mature, in 1850, Esther, with permission from the local Bishop, founded the Congregation of the Sisters of St. Anne and became the first Mother Superior, taking the name Marie-Anne.

In the following years, the congregation grew and expanded throughout Canada and the US New England states.  And while the Congregation attracted more women seeking vowed religious life, the Foundress faced internal discord with the new chaplain assigned by the Church to oversee the group.   She wrote, “As for me, my Lord, I bless Divine Providence a thousand times for the maternal care she shows me in making me walk the way of tribulations and crosses.” (Vatican document)

The foundress was deposed and relegated to the position of laundress, a position she accepted in order to minimize friction and distractions, helping to ensure the further development of the congregation.  As is the way when one has trust in Divine Providence, Sister Marie-Anne was now able to personally teach the novices as they worked alongside of her.

One novice, surprised to learn that this simple woman was the foundress of the Sisters of St. Anne asked her why she, the foundress, was doing laundry.  Her response:

“The deeper a tree sinks its roots into the soil, the greater its chances of growing, branching out, and bearing fruit.”

She also taught through her life and actions that “There is more happiness in forgiving than in revenge.”

On her deathbed, Sister Marie-Anne said to her sisters, “May Holy Eucharist and perfect abandonment to God’s will be your heaven on earth”.  She went home to her “Good God” on January 2, 1890.

Sister Marie-Anne’s example of humility, obedience, forgiveness, and non-violence continue to speak to us today.  We continue her mission to those whom God has put in our path, regardless of where the path is located.

Prayer through the Intercession of Blessed Marie-Anne Blondin